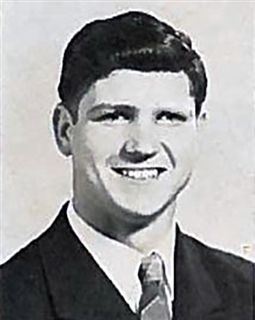 Throughout life, many are called unto by God to take on the challenge of priesthood. This was the case of our school founder, Father Gus Carter, O’Carm.

“When Mount Carmel opened I had two brothers in my first class, then five others” said Fr. Gus. “There were seven of us, and that was in 1934.”
Father Gus entered Mount Carmel in 1938 and graduated in 1942 as Student Body President. Soon after he attended Loyola University for a year and a half and three semesters in Carol College in Helena Montana. During World War II, he attended a Navy program offered, while there he was accepted into The University of Oregon Medical School for two years until the war ended. This was when he decided to join the Carmelite Order in 1946.
“I thought God was calling me,” laughed Fr. Gus when asked why he took on the vocational journey. “I wasn’t all that sure, but I said ‘well I’ll see what happens.’ I still thank God for my vocation, I’m never sorry.”

Among his day to day activities as a priest, he helped found the school. Mount Carmel began planning to build a school, his part into the creation was done with the parishes in San Fernando Valley to recruit students, leading to the first 120 students in Crespi attendance in 1959. Father Gus was aided by two other priests and a Lamen to help serve as the football coach. “The school wasn’t even finished,” Fr. Gus remarked.

“If you’re called by God, there’s nothing like it,” said Fr. Gus for students who aspire to become priests. He then laughed, “And if you aren’t called by God, there’s nothing like it.”
Recalling his time as a priest he said, “personally, it has been a satisfying ride. I can say I’ve never been sorry that I became a priest, just happy for the graces that came with it.”
All Crespi graduates have benefitted from the fruits of his labor and he has inspired many to follow in his footsteps.
Back
Crespi Carmelite High School
5031 Alonzo Avenue
Encino, California 91316-3611
(818) 345-1672 - Hablamos español
info@crespi.org
School Code: 050-867 (CEEB)